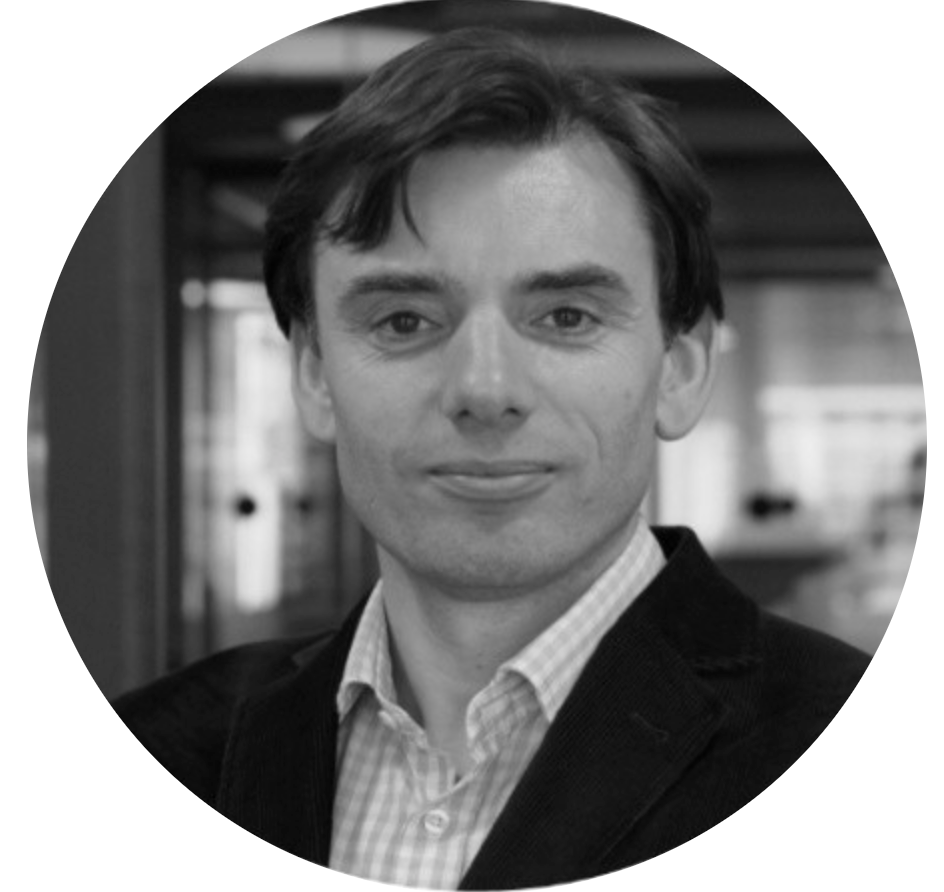 The UK is slipping into recession, which will be uncharted waters for many recruiters. Is it time to buckle up and prepare for the worst, or will a unique set of circumstances soften the blow?

From energy shocks to soaring inflation, there’s no escaping the recession that we’re slipping into.

The Office of Budget Responsibility, which provides independent advice to the government, says the economy will shrink by 1.4 per cent in 2023 and unemployment will jump to 4.9 per cent. All signs point to a bumpy ride until at least 2024, with the Bank of England warning of a “tough road ahead.”

Traditionally, downturns are bad news for the labour market and, consequently, recruitment. In the 2008 recession, 3.7 million people lost their jobs. For many businesses, the initial instinct is to stop hiring altogether or trim headcount while they weather the storm. Based on these facts, we might assume that we’re hurtling towards:

For recruiters who’ve only ever worked in a candidate-driven environment, these prospects may seem grim. But before we start panicking, there’s a reason to be optimistic: this time around, the UK is entering a recession while in the grips of a hiring boom. Recruiters are still under huge pressure to fill jobs in what is very much a candidate’s market, and that won’t change overnight.

Now nobody—not even the best economist—has a crystal ball, so nobody knows how long or deep the recession might be. All we can do is look at some key economic signals that historically have impacted the ability to get candidates for jobs and figure out what might happen if those signals change in 2023.

With that in mind, we’ve developed three scenarios for recruiting in the UK founded on three sets of plausible narratives for the economy:

Needless to say, these scenarios cannot fully predict reality and they’re not meant to be interpreted as forecasts. But we hope they can provide some insights for both the extremes and the middle ground.

One of the first signs of economic contraction any recruiter should notice is a tightening of the job flow, while the flow of candidates increases. Remarkably, considering the abnormal economic conditions, neither of these things is happening yet. While the flow of vacancies has declined slightly from its early 2022 peak, jobs are still being added at a rapid pace. The current surplus of vacancies means job opportunities will remain plentiful throughout a short-and-shallow recession, while the pool of candidates will stay comparatively low.

How low? Well, by current predictions, the recession will force a rise in the unemployment rate from its current level of 3.6 per cent to 4.9 per cent in 2024. This is a material increase, but it isn’t unusually elevated. The UK labour market has yet to fully rebound, with employment 250,000 short of its pre-COVID level. This means we’re going into the recession with near-peak employment levels, which is not a good thing as recruiters are chasing the same small talent pools. 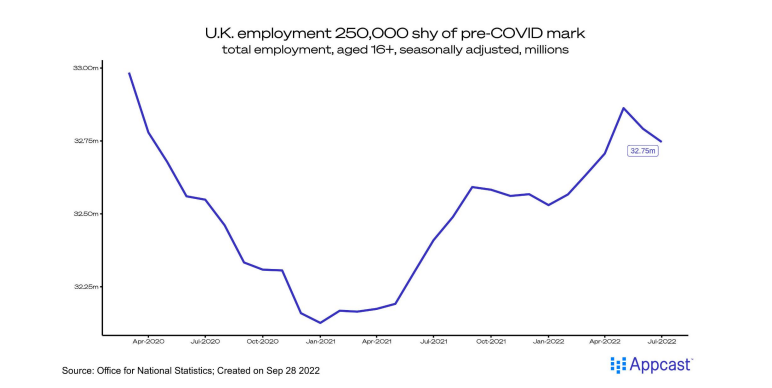 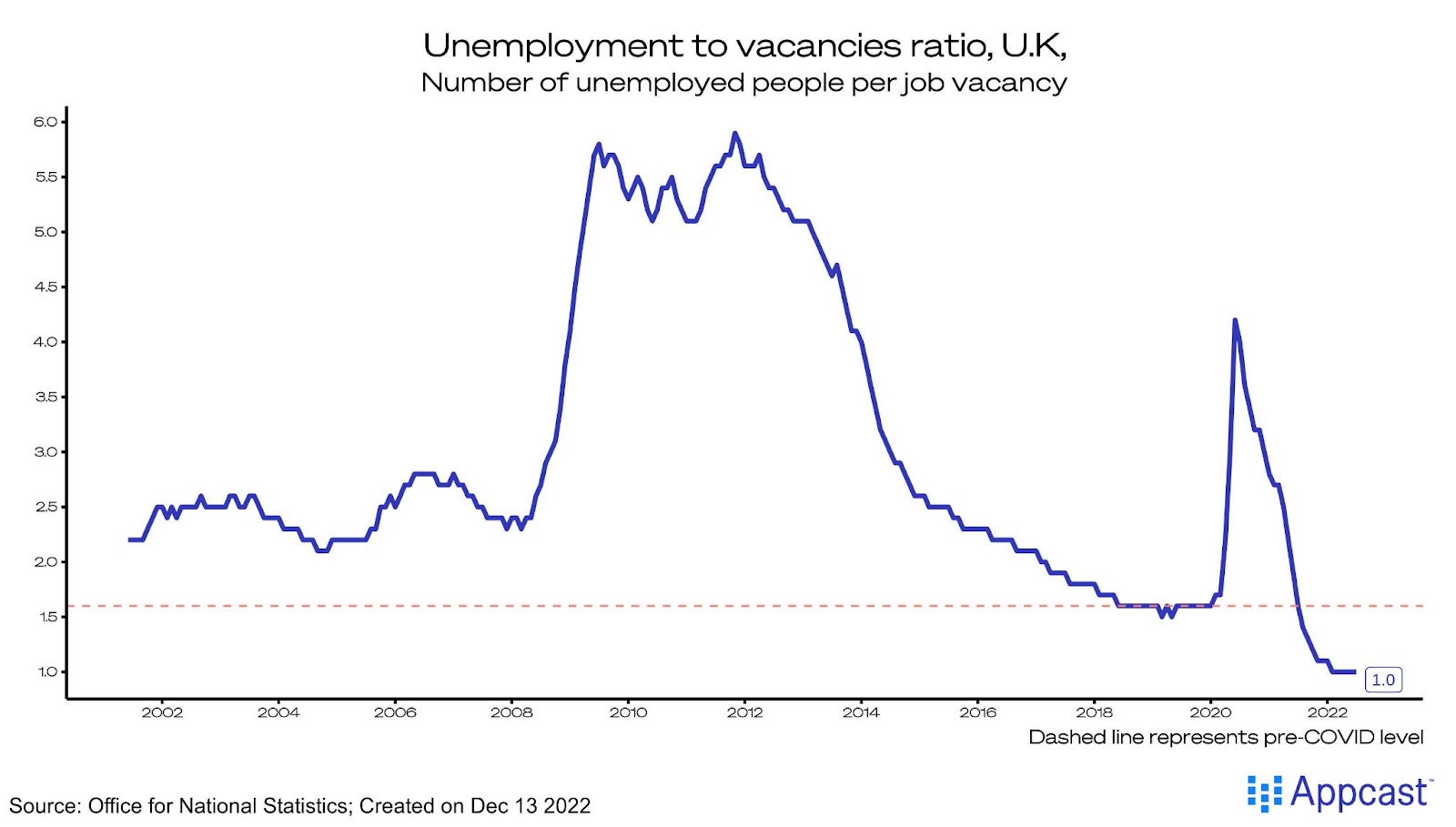 Long story short: The unemployment-to-vacancies ratio (UVR) is a key indicator for recruiters to watch. If it stays low, then there will be no realignment of the labour market—meaning there will be plenty of vacancies to fill and not enough candidates to fill them. That’s not to say some sectors won’t feel the pain of job contraction; recession hits different sectors differently; some will be hit worse than others. But instead of the broad-based joblessness that’s typical of a recession, at the most, we’ll see pockets of reduced hiring volume in certain areas, with continued—or worsening—talent shortages in others.

There is no significant hiring cost reduction in this scenario. The median cost per application (CPA) began to surge in the spring of 2021 and remains elevated. This is unlikely to change in the tight labour market of scenario #1. 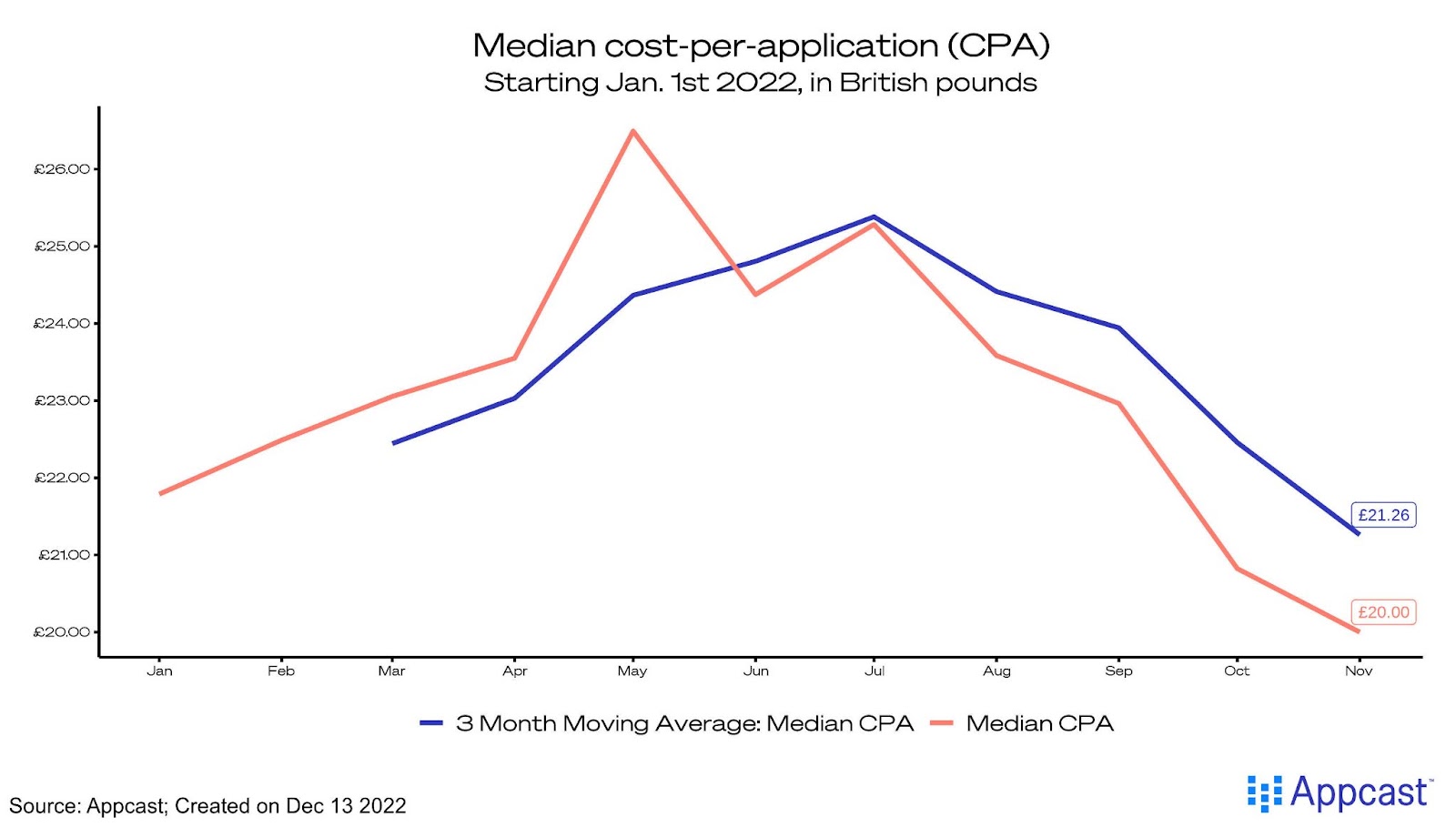 Scenario #2: The sky is falling—a “Doomsday” recession of high inflation and job losses

Rising food and energy costs sent inflation soaring to a 41-year high of 11.1 per cent in October 2022. To rein it in, the Bank of England raised the base rate of interest to 3.5 per cent—the highest for more than 14 years. Some models predict the base rate to rise above 4 per cent in early 2023 and reach as high as 5.25 per cent by Q3. 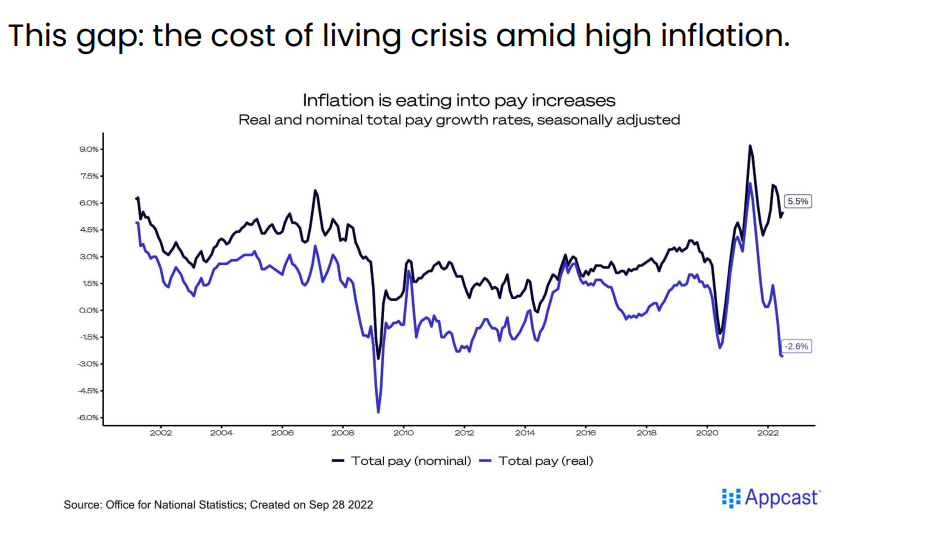 Most immediately, workers experience a decline in real wages as they pay more for food, energy, and housing. Workers respond by pushing (or striking) for higher wages to offset their shortfall of buying power. In a tight labour market like we have right now, bosses may be forced to boost salaries to keep their staff. 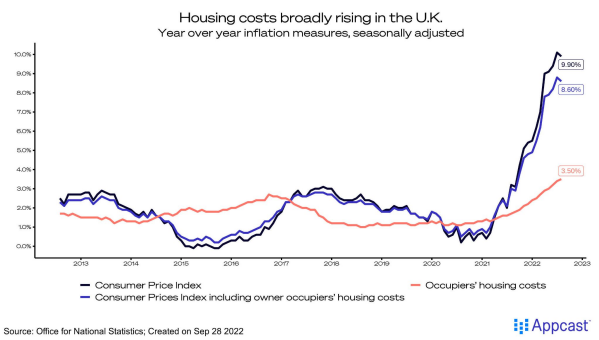 As with all things, there’s a tipping point. Soaring inflation could set off an economic spiral where higher wages lead to higher prices, which in turn leads to higher wages and so on. Employers may struggle if they have high debt (which gets more expensive as interest rates go up) and the wage bill rises too fast, meaning projects get shelved and jobs are streamlined to cut costs.

When the market is as tight as it has been over the past few years, any intervention that shifts the balance of power back to employers—bringing job openings down and candidate volumes up—will make recruiting both easier and cheaper. We expect the UVR to rise in scenario #2 and, as it does, the CPA should come down as recruiters begin to see a greater number of candidates who are between jobs, and who are more willing to respond to you. That’s the good news.

The bad news is, statistically, there will be a higher number of unqualified candidates for every qualified one. Assuming, of course, that you are recruiting at all.

Before we go any further, is the “Doomsday” scenario #2 something we’re likely to see in the next year or two? Probably not. According to OBR, Consumer Price Inflation has already reached its peak and should decline to an average rate of 7.4 per cent in 2023, before stabilising around the 2 per cent target in 2027. So, inflationary pressures are likely to ease over the next few years and may not be as severe a problem for employers as people expect.

Which leads us to…

Scenario #3: A difficult but not disastrous year.

If, as many predict, we have a short recession and a 1.5 per cent increase in the unemployment rate, followed by a stabilisation of inflation and interest rates as we edge into 2024, the expectation is that employers will muddle through as best they can. We may see a lag in job creation and a minor pullback in hiring but no layoffs.

Top talent will still be in demand, and it should be slightly easier to find than today. However, while the UVR may rise slightly in this scenario, the numbers will be closer to scenario #1 than scenario #2.  The net result is the jobs market should gain some much-needed balance as the number of job vacancies to prospective candidates evens out.

CPAs should come down as the market recalibrates; however, there may be other pressures on recruitment marketing budgets. One possibility, as seen in previous recessions, is that workers become a bit more reluctant to make changes—when the outlook is uncertain, riding it out in a rock-solid job is often the safest bet.

For recruiters, expect it to get tougher to pique the interest of passive candidates. They may be reluctant to move unless you can offer a higher salary or more job security. Bear in mind, too, that inflation is slightly elevated in this scenario. Job seekers will expect higher pay to keep up with higher prices.

Final word: a semi-bumpy ride ahead

No one knows how the recession will play out, but so far, there’s little to indicate that this will be your typical recession characterised by hiring pullbacks and widespread unemployment. In fact, we may be looking at a continued tight labour market that gently rebalances as the year plays out.

This is good news for recruiters. Macroeconomic conditions should make hiring slightly cheaper for some employers in some sectors, and it should mean that some of the very tight recruiting practices we’ve experienced over the last few years are finally coming to an end. At the same time, it probably will be an unpredictable year that will force recruiting to carry on evolving. Be sure to keep an eye on the data to help you navigate the choppy seas ahead!

Not sure where to start? Check out recruitonomics.com where we’re constantly looking at both economic and recruitment data to help make sense of the hiring landscape. You can even subscribe to have weekly articles delivered straight to your inbox – sign up here – and stay tuned in the coming months as we release our first-ever U.K. Recruitment Marketing Benchmark Report!