The November jobs report, built off two surveys, was of a split-mind: the survey of businesses showed weak hiring growth, while the survey of people showed a sharp drop in unemployment and surge in labor force participation. Future data will determine which survey was more correct. The U.S. created 210,000 net new jobs, and previous months’ numbers were revised upward. This was a huge miss, as forecasters expected around 500,000 in job growth. On the flip side, the unemployment rate ticked down 0.4 percentage points to 4.2%. And the rebound in job seekers (labor supply) was very strong: the labor force grew by nearly 600,000, the largest monthly increase in over a year, but 5.9 million people still want a job but aren’t actively looking.

Weak hiring, according to establishment survey

November payroll job growth was weaker than expected (up just 210,000). Prior months’ data was revised upward by 82,000. Analysts had expected stronger growth, with median forecasts for around 500,000. The “jobs deficit” compared to pre-pandemic times fell to about 4.0 million – that is how much ground the labor market still has to make up. 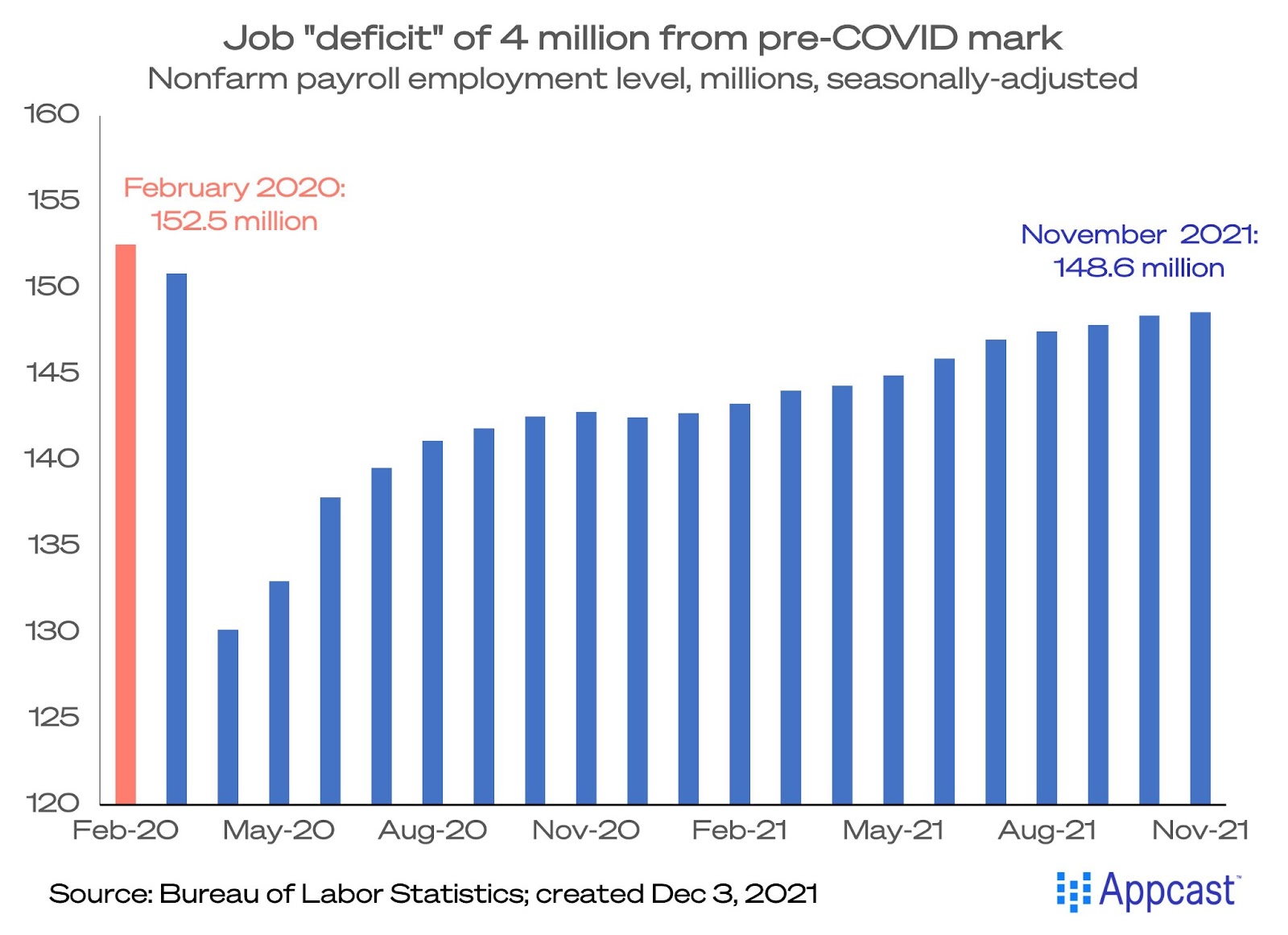 The industry-level breakdowns were disappointing. Retail jobs shrunk by 20,000, in a month when economists expect stores to be hiring briskly in anticipation of the holiday shopping season. Leisure and hospitality jobs grew slightly (up 23,000). Transportation and warehousing is a bright spot that keeps delivering: jobs grew by 50,000 in November, and are 210,000 above their pre-pandemic level, fueled by the growth of ecommerce and delivery-based services. 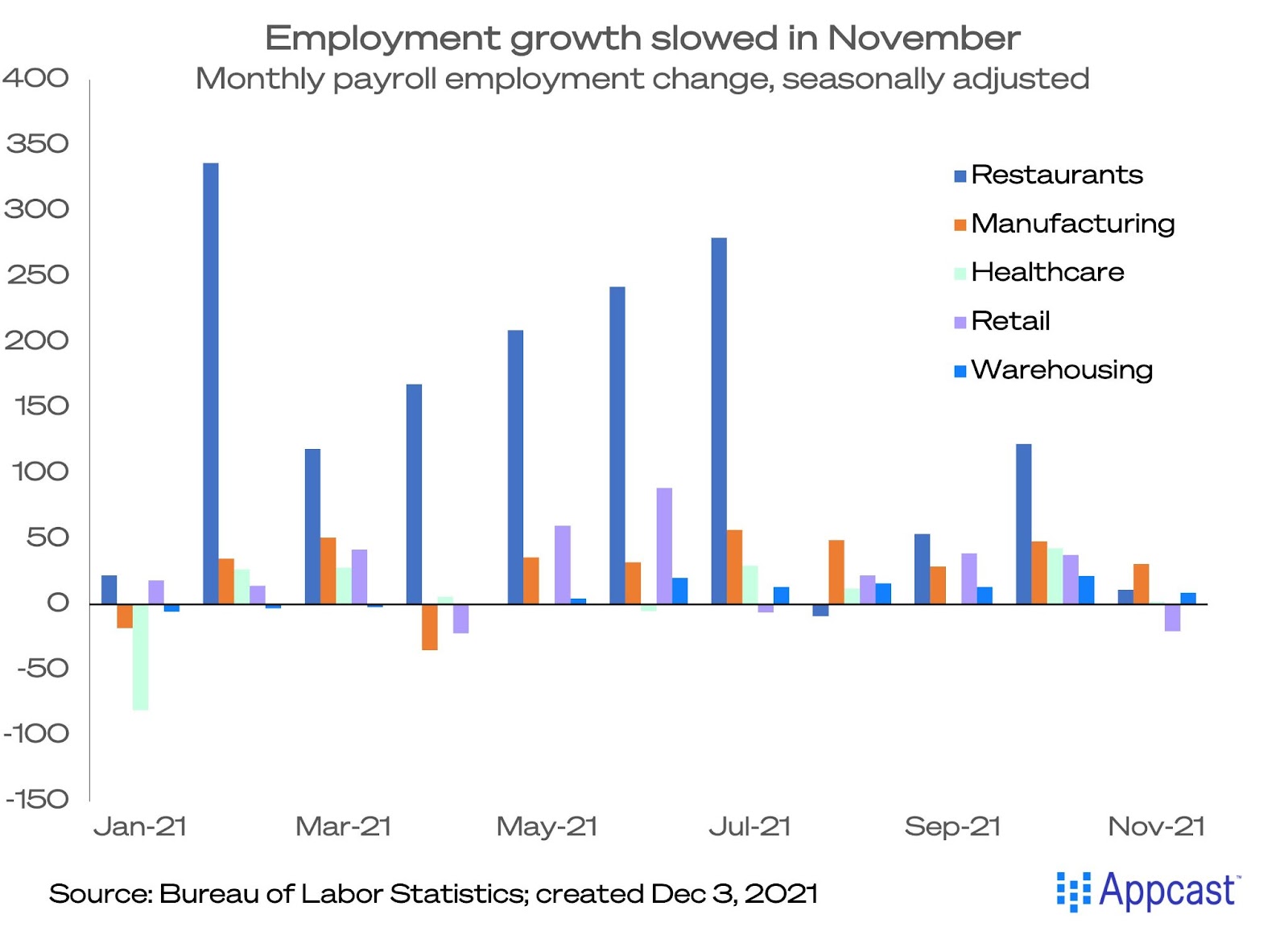 Surging participation, according to household survey

Data from individuals (aka the household survey) showed employment growth of 1.1 million on the month, a conflicting signal from the establishment survey. Part of the disconnect between the two surveys could be seasonal adjustments: seasonally unadjusted employment rose 778,000. Maybe a lot of those jobs will fade away by January, or maybe not. The labor market is in a weird place.

According to the household survey, the unemployment rate ticked down sharply, by 0.4 percentage points, to 4.2%. The total labor force grew by nearly 600,000, the largest monthly increase in over a year. This caused the labor force participation rate to move up two-tenths to 61.8%, and the prime-age employment to population ratio rose strongly, to 78.8%. All around,  the household survey showed a strong rebound in labor supply. That said, there are still 5.9 million people who want a job but aren’t actively looking; that’s up from around 5.0 million pre-pandemic. 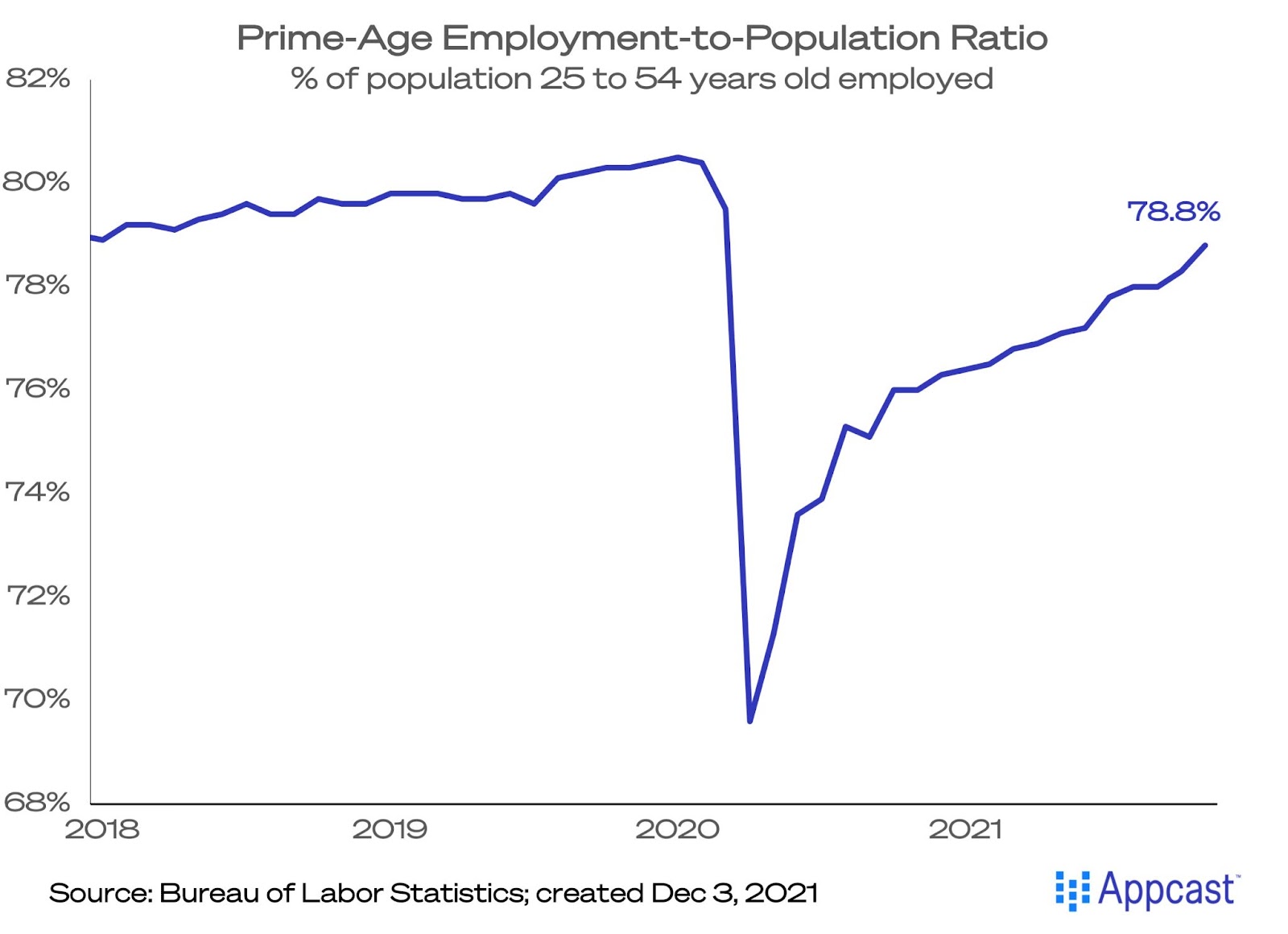 Wage growth continues to be strong

Employers are eager to hire – reflected in the 10.4 million job openings in September. But given that many would-be job seekers are hesitant to join the labor force, what has resulted is labor shortages and strong wage gains. Average hourly earnings for all employees rose 4.8% in November, compared to a year ago. These are nominal wage gains (that is, not adjusted for inflation).

Wage increases for rank-and-file workers – production and nonsupervisory employees – accelerated in November, up 5.9% year-over-year. From February 2020, nominal wages are 10.2% higher for rank-and-file employees, and up 8.8% for all workers. Strong wage growth is from a confluence of factors – strong demand by employers and higher inflation being two notable causes. 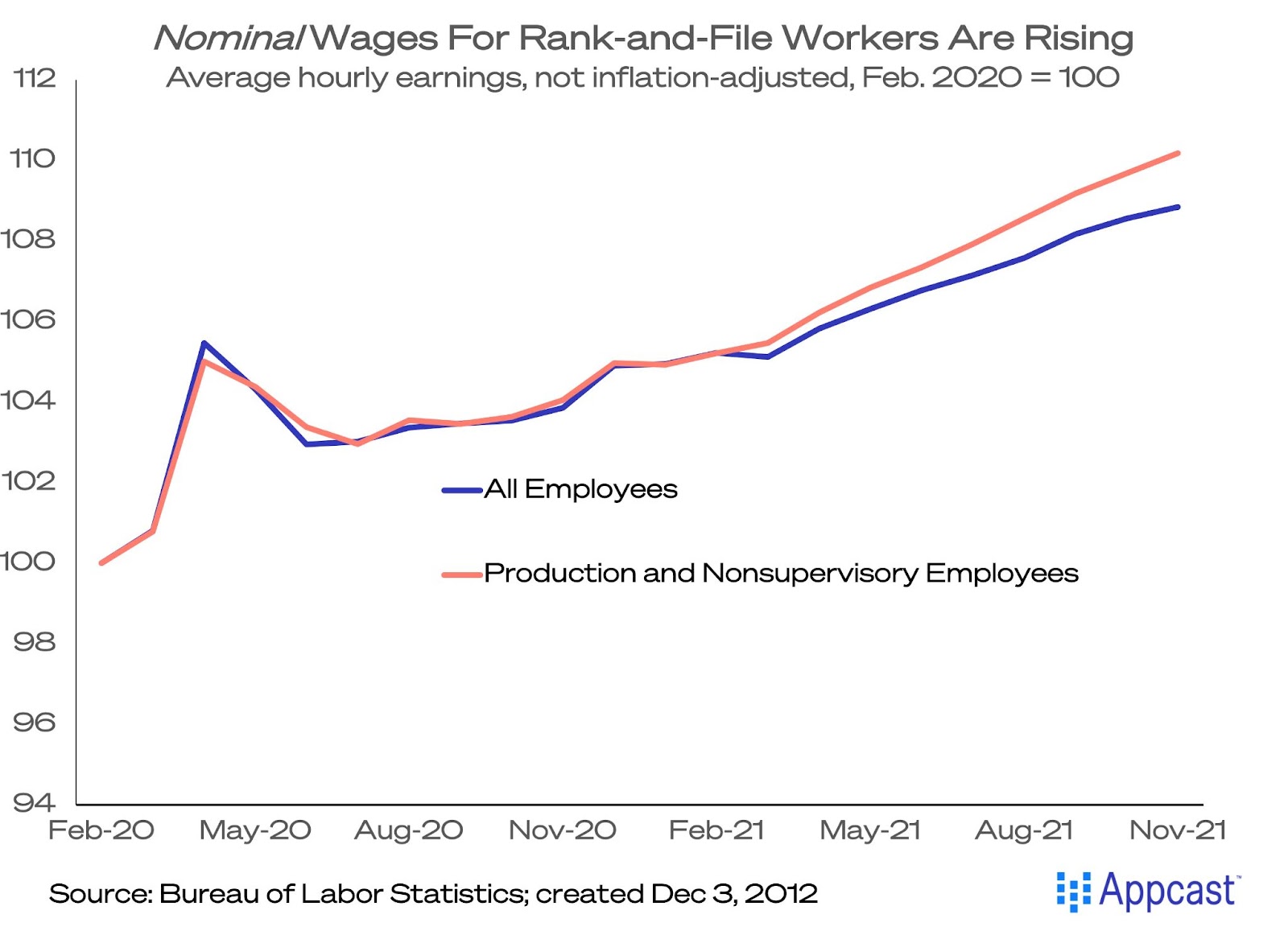 What does this mean for employers?

Weaker-than-expected job growth (according to the establishment survey) conflicts with strong increases in labor force participation (according to the household survey). If more would-be job seekers are lured into the labor force from rising wages, that could ease recruiting challenges. That said, with record-shattering levels of jobs available, this tight labor market is not going away anytime soon. Could the Omicron variant dampen hiring demand in December? Sure, we’ll have to see. But right now a disappointing and conflicting job report doesn’t change the basic story: competition for workers is intense.