Surge in Hiring Reflects Strong Demand, But Labor Force Has Not Yet Recovered

The October jobs report showed strong demand for workers. The U.S. created 531,000 net new jobs, and previous months’ numbers were revised upward. The unemployment rate ticked down to 4.6%. But the rebound in job seekers (labor supply) has yet to fully happen: Growth in the labor force was basically flat, and 6.0 million people still want a job but aren’t actively looking.

Hiring demand is strong and broadly-based

October job growth was strong (up 531,000) and broadly-based. Notably, past months’ data was revised upward substantially. This happens as new information comes in. The August and September jobs numbers are now understood to be higher by a combined 235,000. What previously looked like weak summer job growth is now decent. But employment is still below its pre-pandemic level by about 4.2 million jobs. The jobs recovery is kicking into high gear but has more ground to make up. 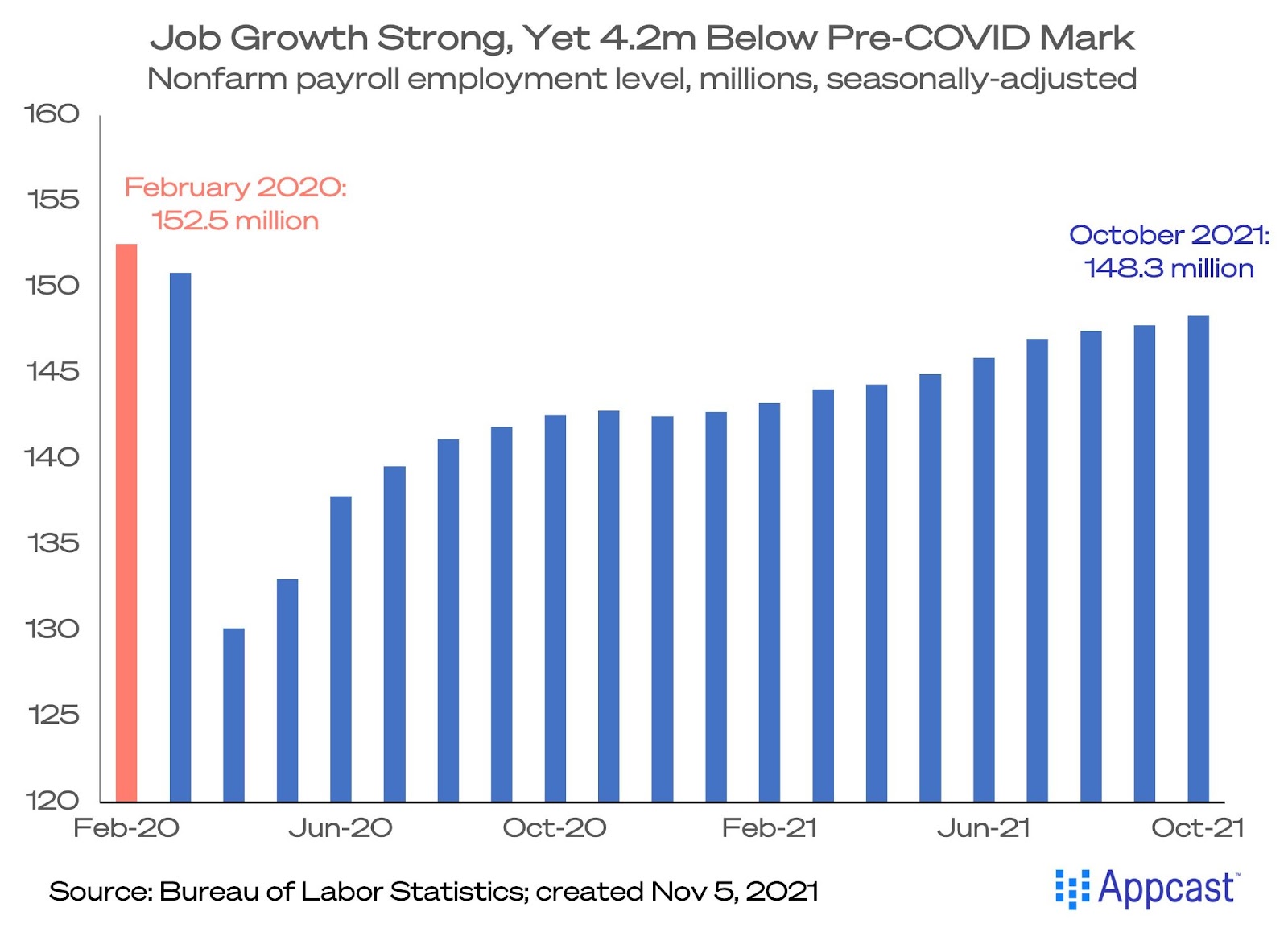 The Delta effect is fading, thankfully

The surge of the Delta variant in August and September depressed hiring in COVID-senstive industries. But in October, as cases fell, that reversed. Leisure and hospitality jobs grew by 164,000 in October, an improvement from two months of lackluster growth – leading to a 119,000 increase in restaurant jobs. Retail jobs grew by 35,000.

Warehousing is a bright spot that keeps delivering: Jobs grew by 20,000 in October, and are well above their pre-pandemic level, fueled by the growth of ecommerce and delivery-based services. Healthcare and manufacturing jobs also grew in October. The hiring gains were broadly-based. 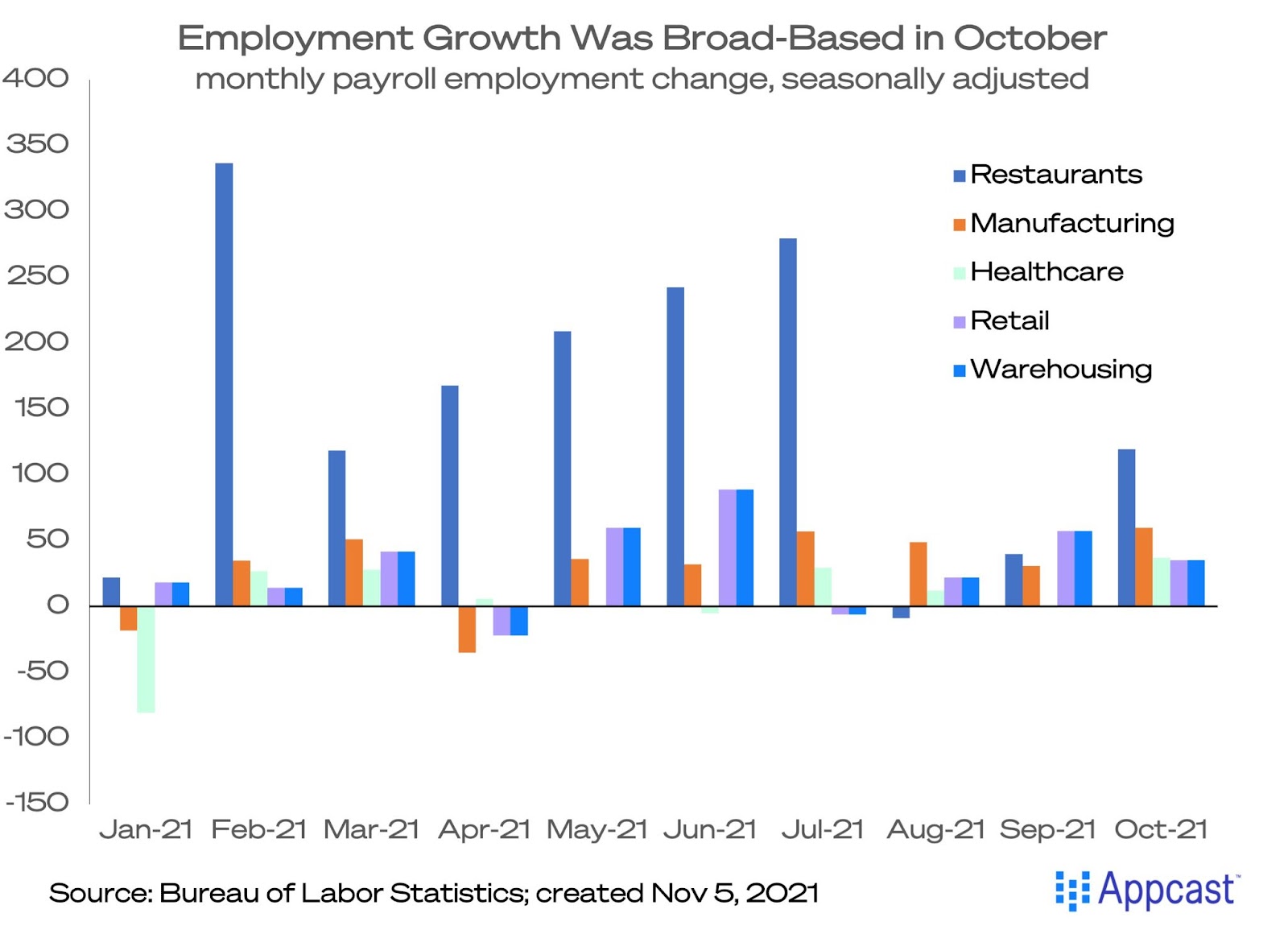 Labor supply still has a ways to recover

The unemployment rate ticked down to 4.6%. The pool of workers to hire still has a ways to go to get back to its previous level. Overall, the labor force barely ticked up – by 104,000 – leaving the labor force participation rate basically unchanged at 61.6%.

The prime-age (25-to-54 year old) employment-to-population ratio ticked up to 78.3% in October, which is a good sign. But that is still down two percentage points from its pre-pandemic level. Bottom line is: The number of individuals who want a job but are not actively looking (and thus not in the labor force) held steady around 6.0 million. That is up nearly one million from pre-COVID levels, despite there being record-high job openings. 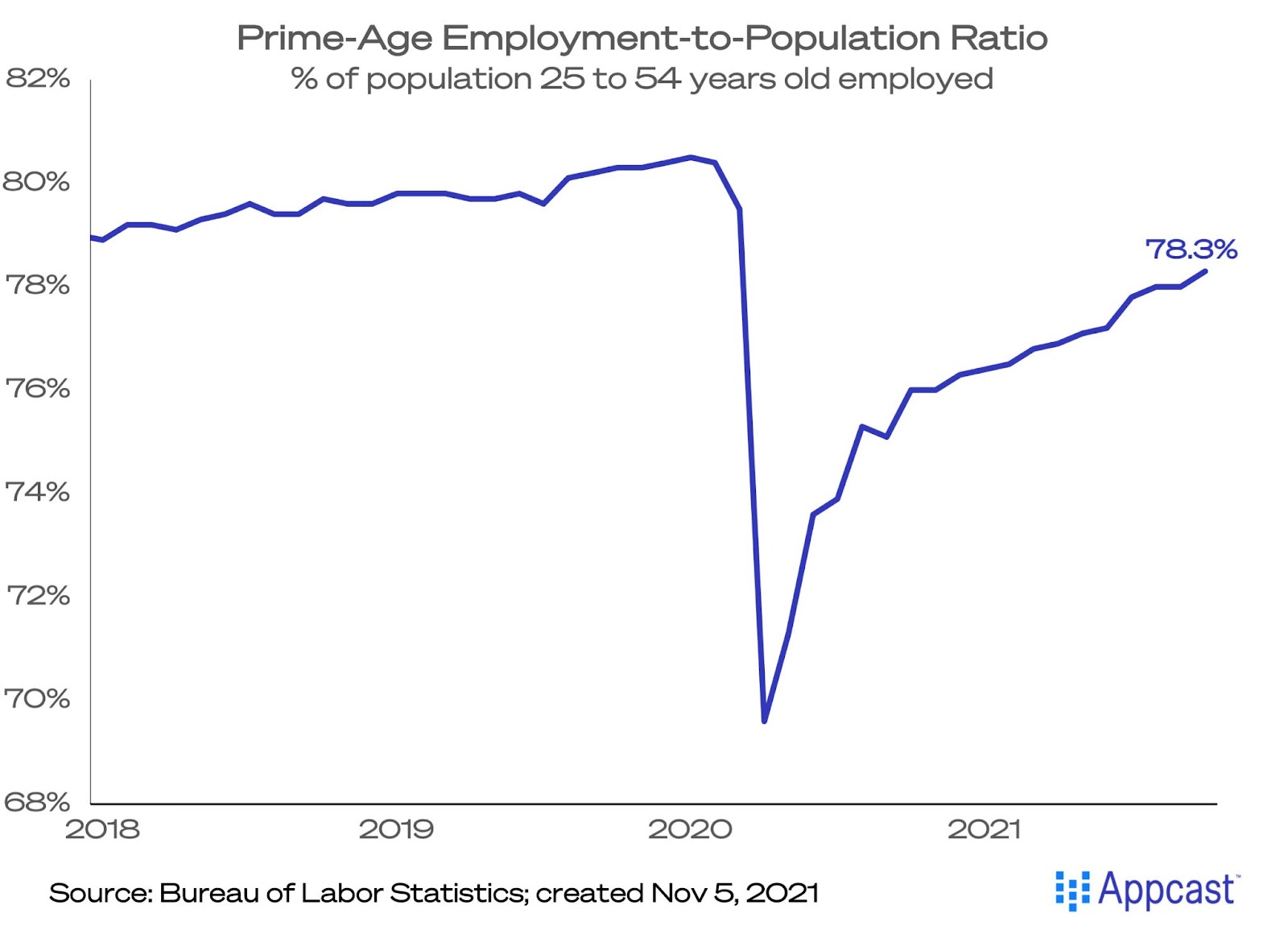 Wage growth was up modestly

Employers are eager to hire – reflected in the 10.4 million job openings in August. But given that many would-be job seekers are hesitant to join the labor force, what has resulted is labor shortages and strong wage gains. Average hourly earnings for all employees rose 4.9% in October, compared to a year ago. These are nominal wage gains (that is, not adjusted for inflation).

Wage increases for rank-and-file workers – production and nonsupervisory employees – rose even faster, up 5.8%. From February 2020, nominal wages are 9.6% higher for rank-and-file employees, and up 8.6% for all workers. Strong wage growth is from a confluence of factors – strong demand by employers and higher inflation being two notable causes. 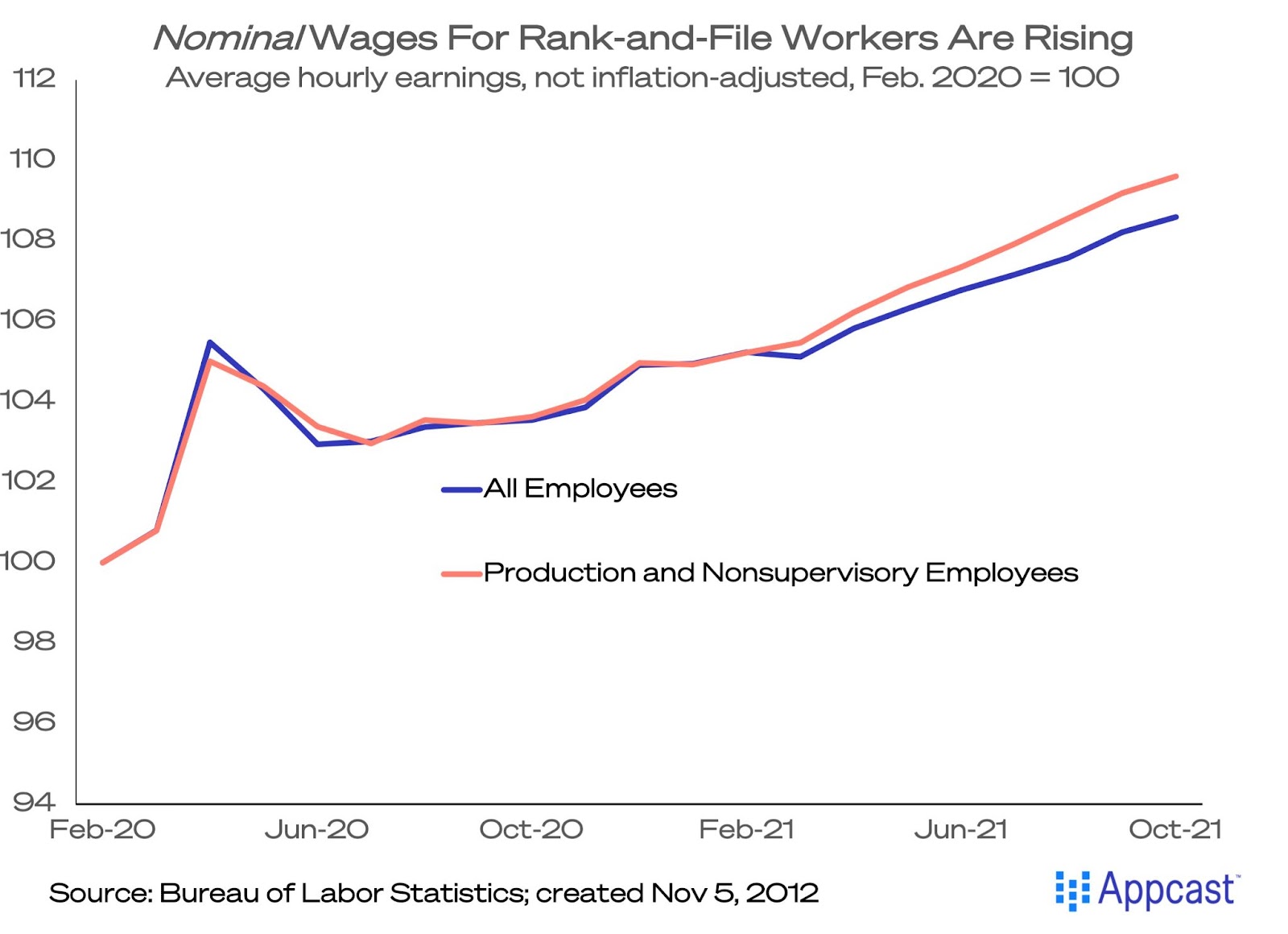 What does this mean for employers?

Strong hiring growth, across a number of sectors, combined with many would-be job seekers not yet returning to the labor force (despite record-shattering levels of jobs available) means that this tight labor market is not going away. And that makes recruitment very challenging. Competition for workers is intense, and you may have to offer higher wages to entice them. Stay tuned for future updates as we keep an eye on this ever-changing hiring landscape!