Why Are Recruiting Costs Skyrocketing?

The COVID recession that began in 2020 and the subsequent recovery through 2021 has been unlike anything in U.S. economic history. The labor market absorbed an enormous shock, with over 20 million workers laid off or furloughed in the spring of 2020, and the unemployment rate shooting up to nearly 15%. But the subsequent rebound has far exceeded expectations. This explosive economic comeback set the stage for 2021 – a year that became a perfect storm for online recruiting costs to surge. Three overarching factors explain why it became a lot more expensive to acquire talent in 2021: 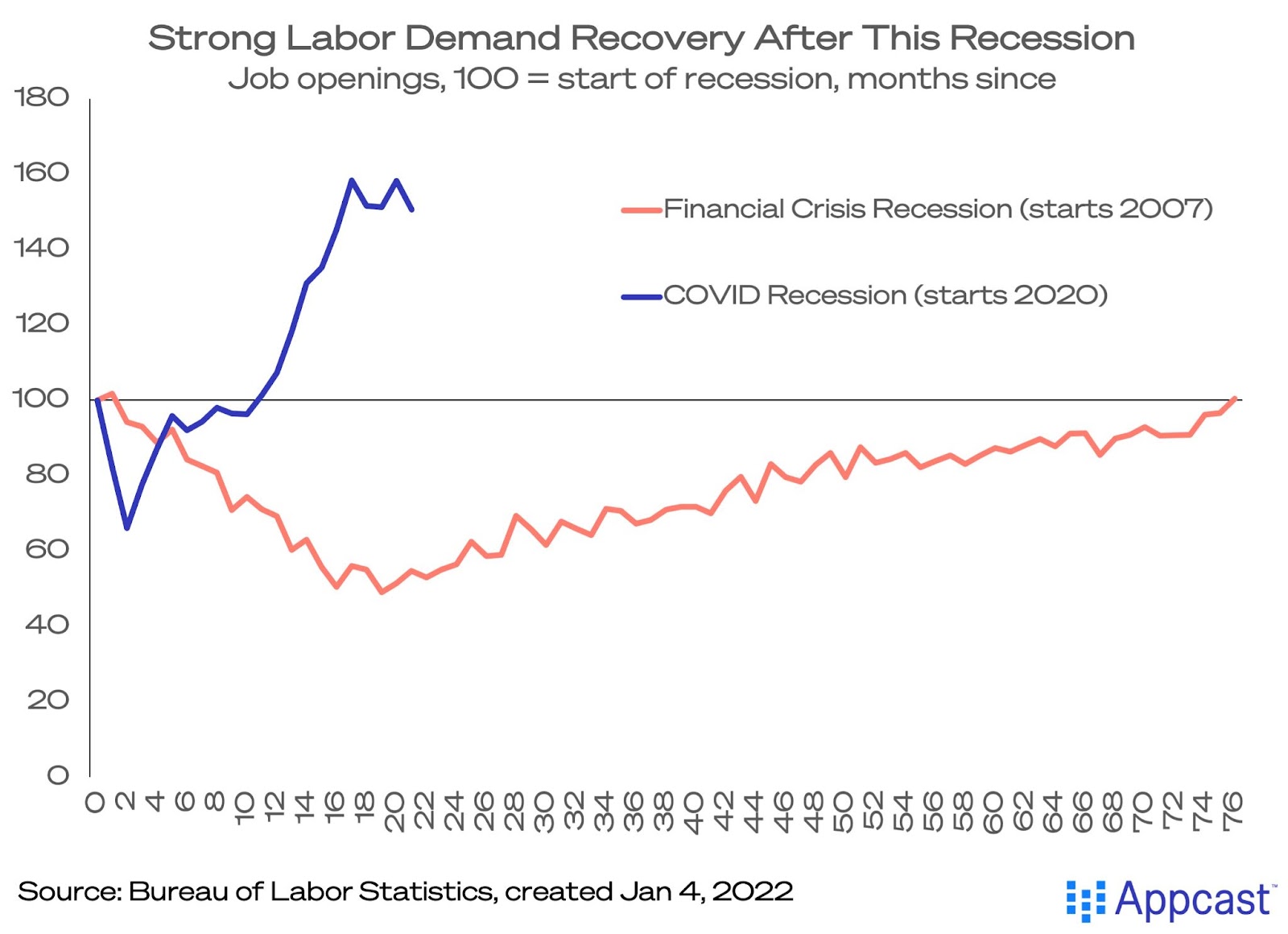 By February 2021, job openings surpassed the all-time high set in late 2018. And then proceeded to rise another 47%, peaking at over 11 million in July. The demand for labor has been unusually broad-based, with openings up in every major industry: up 113% in manufacturing, 42% in retail, 38% in professional and business services, 14% in construction, and so on. 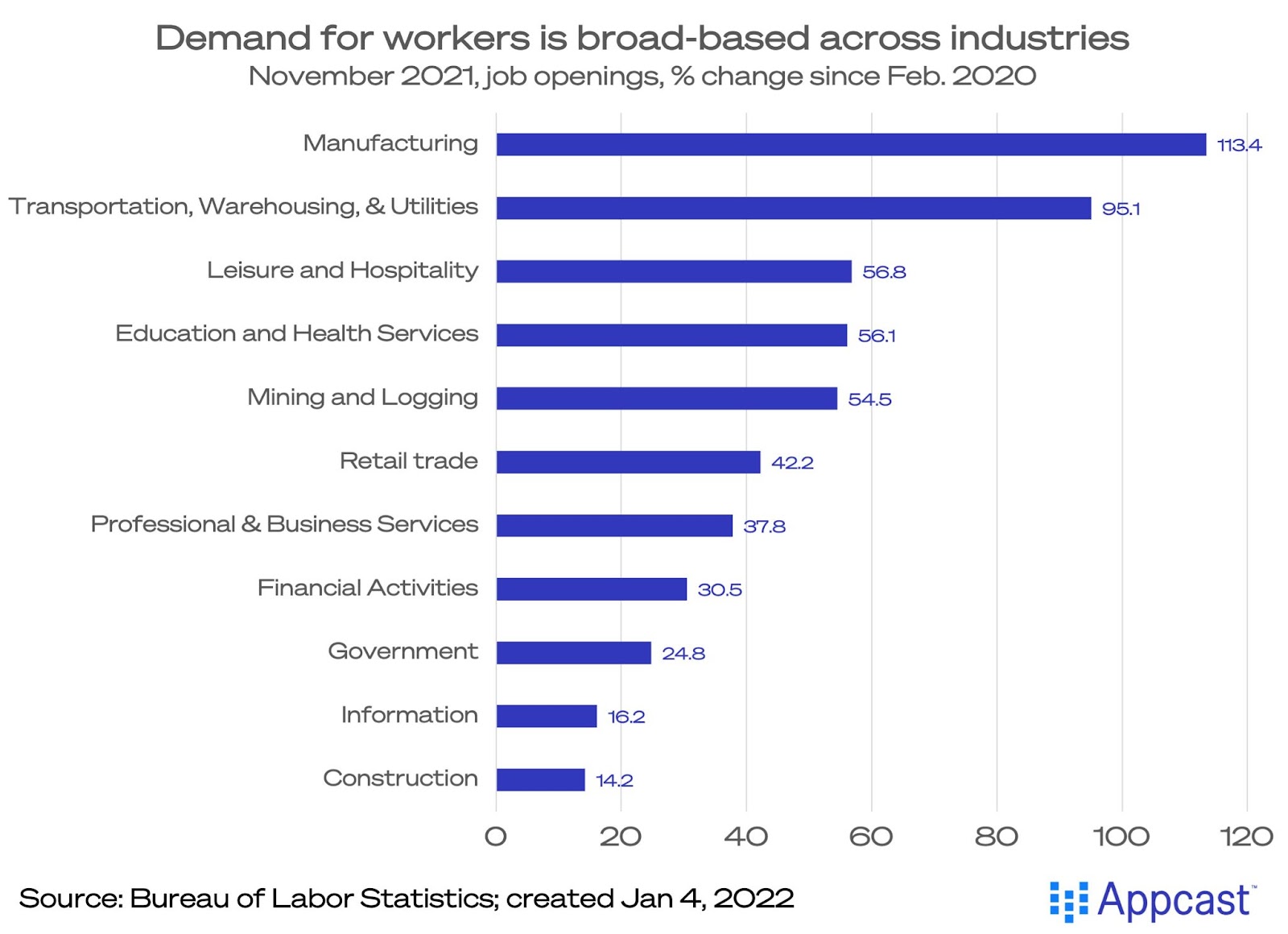 Second, job seekers correctly ascertained that the balance of power had shifted; 2021 was a workers’ market. Labor supply has not rebounded as fast as labor demand. We see this imbalance clearly in the following chart, which shows job openings exceeding unemployed persons by 3.8 million in November 2021. 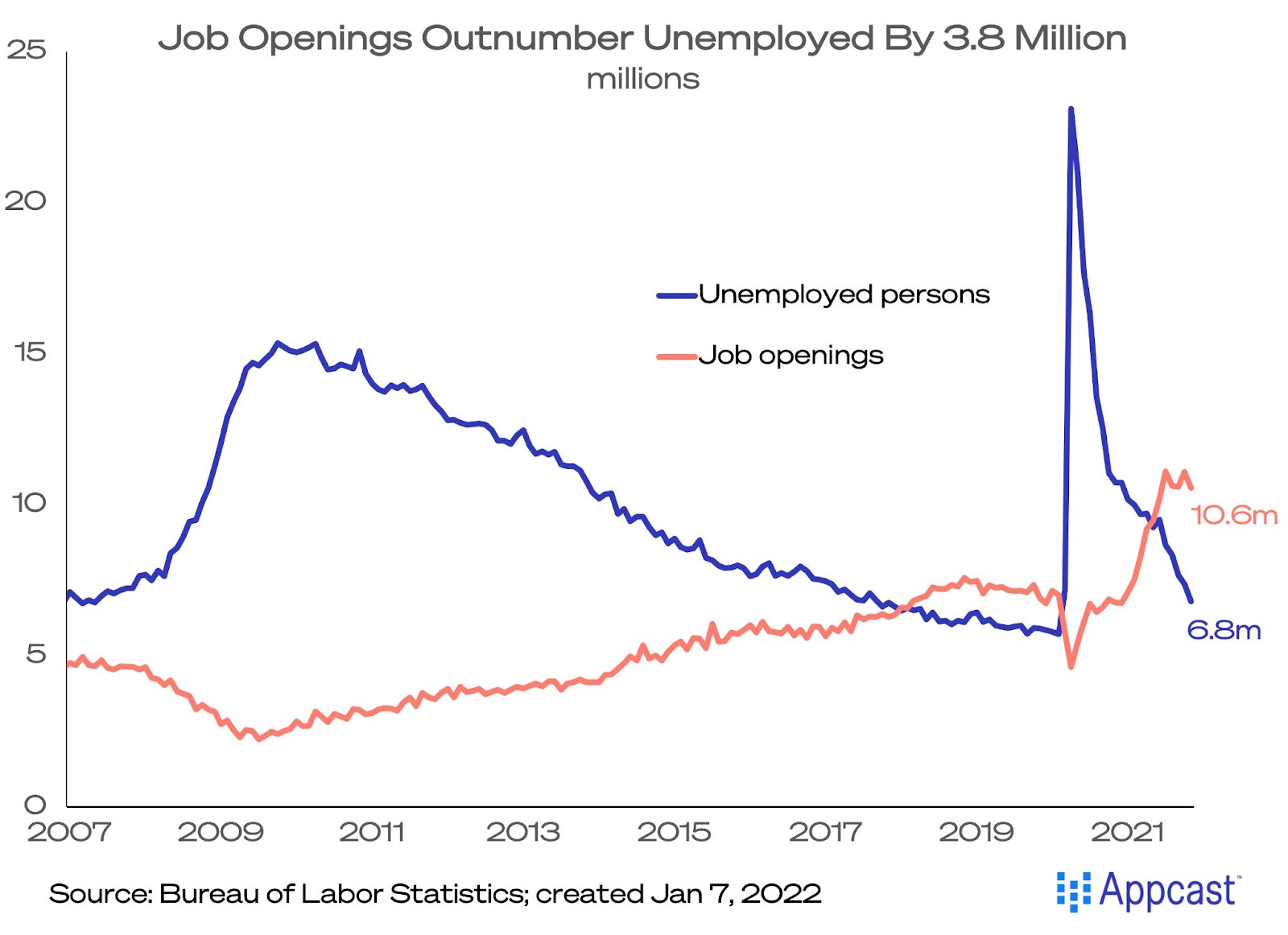 There remain 5.6 million people who say they want a job but are not actively searching for one. This “shadow labor force” was able to stay on the sidelines in 2021 because household finances were in relatively strong shape. Research from the J.P. Morgan Chase Institute found that checking account balances were far above pre-pandemic levels, thanks in part to government stimulus checks. For the poorest households, this gave would-be job seekers an opportunity to weigh their employment options and not jump at the first job offer.

Furthermore, according to the Indeed Job Search Survey, the top reason given by unemployed people for not urgently searching for work was having an employed spouse; care responsibilities and having a financial cushion were also widely cited. Extended unemployment benefits, which some states let expire early in 2021, appeared to have, at best, a modest effect at keeping job seekers on the sidelines of the labor market.

Quitting was on the rise, too: the Great Resignation entered the mainstream lexicon. Sure enough, quit rates across a number of industries rose to all-time highs. Employees aren’t giving up on work altogether, but instead are empowered by ample choices. That said, the Great Resignation has been mostly a phenomenon in lower-wage industries, with less-educated workers most likely to quit. In short, a  major reason recruiting costs accelerated in 2021 was beyond the control of recruiters – a historically tight labor market, where job openings were plentiful and workers had the upper hand. 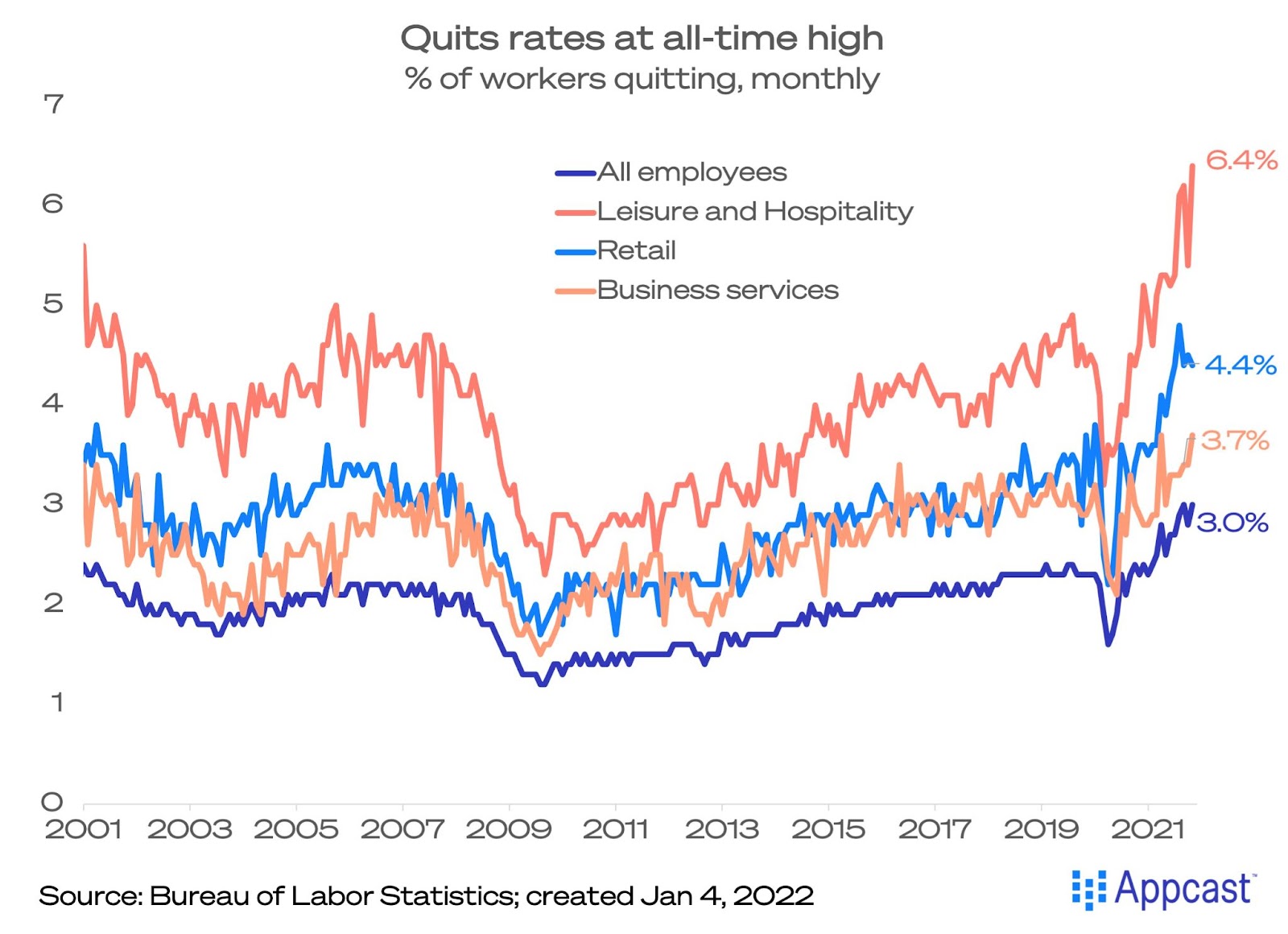 Third and finally, surging inflation. Soaring recruiting costs aren’t just a result of imbalance between supply and demand in the labor market; rising prices have affected the entire economy.  Consumer price inflation is at a 40-year high, and it’s not only individuals who are facing higher costs for food, fuel, and other items. Businesses are also experiencing sticker shock, with input goods and services inflation accelerating in 2021. As an analogy to the Consumer Price Index,  the Producer Price Index (PPI) was up nearly 23% from a year prior in November 2021, the highest increase in 47 years.

A subcomponent of the PPI tracks what businesses pay for online advertising – whether it be on Google, Facebook, or job board sites like Indeed. This metric for online advertising has been falling for the better part of a decade. In the10 years from January 2011 to January 2021, online advertising costs declined by 34% according to this metric. But 2021 marked a reversal of this trend. Costs began to surge in the spring of 2021 in a way they never had before. In June, online ad prices were up 26.2% from a year before. Surely, a big explanation for this reversal is that the pandemic triggered a sharp shift upward in online activity from consumers (what else were we going to do?). And so businesses, sensing the end of the worst of the pandemic in the spring of 2021, began bidding against each other to reach those individuals wherever they were on the internet. 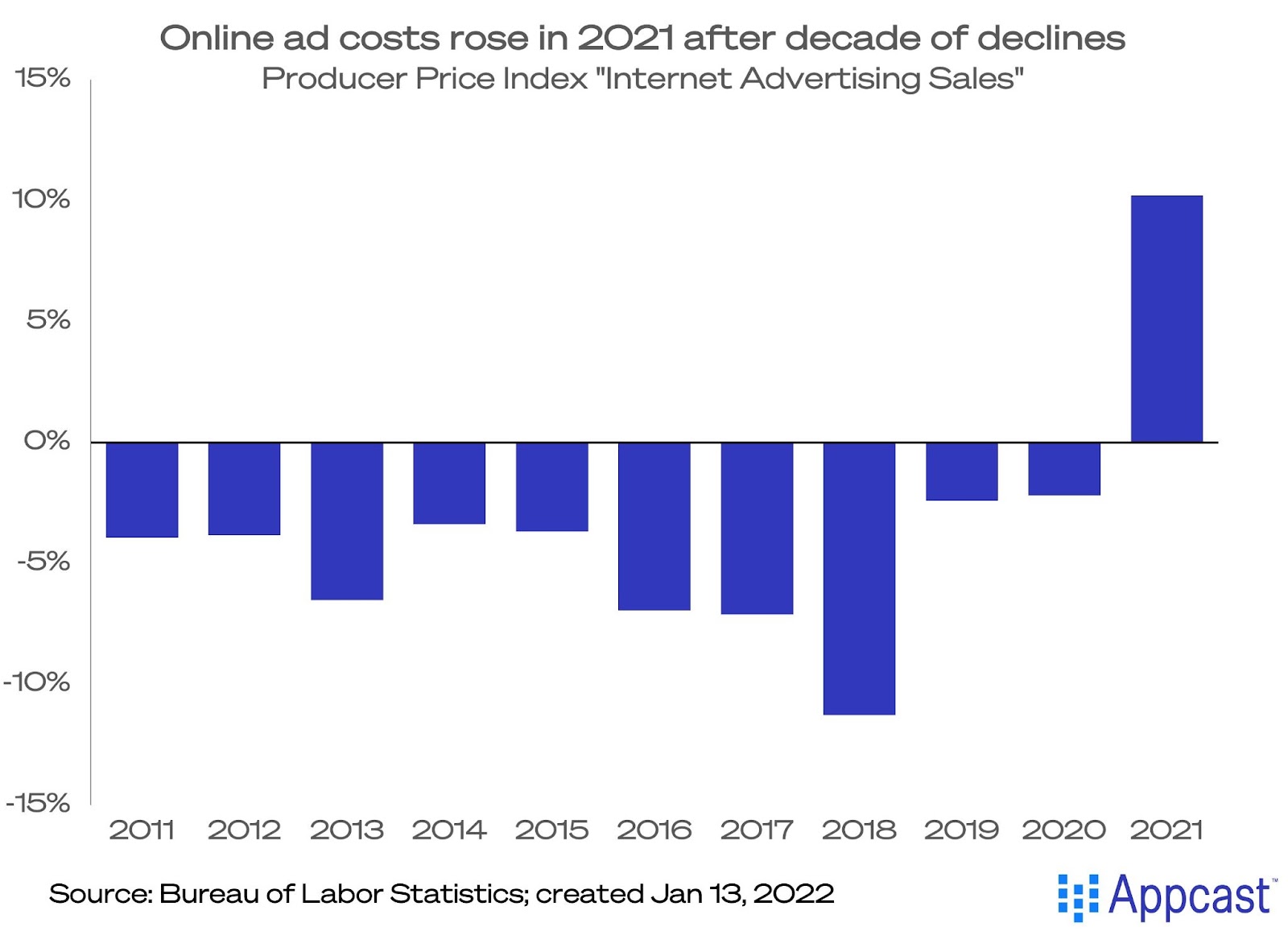 Thus, it’s no coincidence that recruiting costs surged in the spring and early summer months of 2021, as you’ll soon see in this Benchmark Report. That is the moment when online advertising prices more broadly began to accelerate, too. And when job openings soared higher as well. The likely driver of all these trends was the “reopening” of the U.S. economy, with vaccines becoming widely available, and consumers and businesses alike flush with cash. The subsequent inflation spared no part of the economy.

All these factors together created a combustible mix for online recruiting costs. No wonder they rose as sharply as they did, fueled by a historically tight labor market and above-trend price acceleration.

To see the impact of the labor market on recruitment marketing and to dig into key industry benchmarks for improving your recruiting outcomes, download our 2022 Recruitment Marketing Benchmark Report.

Written by Appcast Labor Economist, Andrew Flowers. An abbreviated version of this is included in our most recent Recruitment Marketing Benchmark Report.